Building an igloo with a Gratnells tray

Along with the Gratnells Science Technician of the Year award we also sponsored the ‘Best Film from a Science Technician’ at the Royal Institution ceremony which was organised by Planet-Scicast. It was won by Chris Bell who works in the Science Department of Sacred Heart Catholic High School in Newcastle. He submitted his film ‘Igloo’ after being handed a leaflet from his Head of Science promoting the annual Awards.
'I had already made a short film earlier on in the year when we had an unusually heavy fall of snow, which demonstrated the properties of snow,' said Chris. 'And purely by co-incidence, I had borrowed some Gratnells storage trays from school that we use in the science prep-rooms as a "block-making mould" to form snow bricks to make an igloo.' Chris’s demonstration then went on to show how the properties of snow – of which its composition is 90% air – in the form of an igloo, make a great ‘soundproof’ space.

Murray Hudson, Sales & Marketing Director of Gratnells said: 'We were delighted to be able to sponsor this Award which highlights the essential – and often overlooked – role Science Technicians perform in schools and colleges up and down the country supporting the teaching of science, and we were delighted to honour Chris at this important event.'
As well as receiving the Award from Marty Jopson, Chris and his wife Leanne (who helped shoot the film) also had the opportunity to see another BBC celebrity at last month’s event – Professor Kathy Sykes, who was attending the event to present Awards on behalf of Gratnells for their Science Technician of the Year Award (see story above).
'It was a thrilling event in London which I enjoyed immensely. To be nominated was amazing, but to win was brilliant. I was buzzing for several days afterwards and igloos are now "really cool" in our school,' said Chris. And when Chris returns to Sacred Heart after the summer holidays it will be in his new role as Senior Support in the Science Department, when he can demonstrate more of his experiments directly to the students rather than on film. 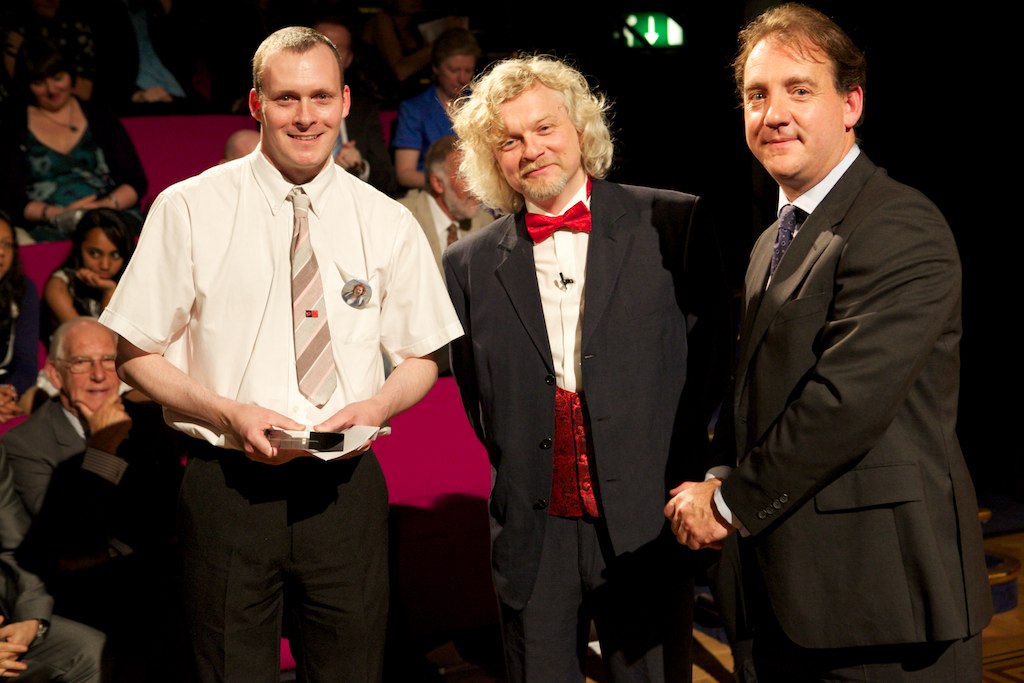 Picture: Chris Bell, left, receives his award from The One Show's Marty Jopson and Murray Hudson, Sales and Marketing Director of Gratnells.)